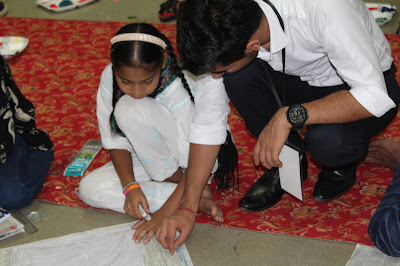 'Look at the children, Look how they shine!'

It was 6th of September, the day of colours, smiles and the glitz. Underprivileged children from Kartar Aasra adorned the NGO-subevent KALAKRITI, at ENIGMA 2k17, with their presence and vigour.
Armed with crayons, sketch pens and a refreshing enthusiasm, 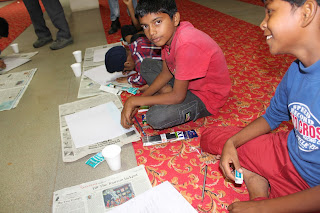 ]the kids painted their hearts out for an hour. Amongst giggles and laughter, the kids gave wings to their imagination- the simple act of being at liberty to express themselves, bringing wide smiles to their beautiful faces at Tagore theatre.

Some chose to dedicate their pieces to their mothers, others brought life to the city hue and some highlighted the issue of pollution, nature conservation and women safety in their art.
The bunch that despite lacking the resources we had, so beautifully managed to put their thoughts to canvas, was indeed a worth watching sight. Winners were accoladed with prizes.
Refreshments and goodies were then distributed, and the children left for their home, leaving behind an air of optimism and joy.

Their smiles, efforts, creativity and occasional waves of laughter made the event a great success.